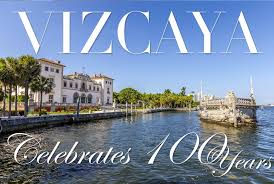 Vizcaya Invites the Community to Explore the Vizcaya Village

MIAMI – In celebration of its centennial year, Vizcaya Museum and Gardens invites the community to discover an unknown part of the estate, known as the Vizcaya Village, through free community programs. A series of Vizcaya Village Open Houses will include a variety of fun activities for the entire family, encouraging guests to explore the Village as well as learn more about its past and plans for the future. I’m excited to be on board with the team at Vizcaya and to shine a light on the activities and events that Vizcaya holds for the locals and thousands of visitors a year. This charming property, owned by one of the founding South Florida families, the Deering’s, holds hidden secrets within it’s 100 year old walls, gardens, and now the village. Open to all to enjoy, create, and explore. Many exciting events are in the works and I look forward to keeping my eye on it all and including Broward and Palm Beach visitors to this spectacular venue. Read on for links to upcoming events as well as an in depth interview with the Executive Director of Vizcaya Museum and Gardens, Joel Hoffman.

Sheltered under large banyan trees, the Vizcaya Village is a natural extension of Vizcaya Museum and Gardens, located across South Miami Avenue from the Main House and gardens. The historic Village was part of the original 1916 estate, and consisted of more than a dozen buildings with the intent of making Vizcaya virtually self-sufficient. This idea evoked the spirit of European estates of the Renaissance era while, on a practical level, compensating for the limited services and merchandise available in early twentieth-century Miami. The Village included staff quarters, an automobile garage, workshops and an array of barns.

Today, 100 years later, the plans for the Vizcaya Village aim to reunite the two sides of the Vizcaya property to realize its full potential as a cultural hub for the community. This outlines a strategic approach to improving upon Vizcaya and telling its full history by restoring land and historic buildings, with the goal of bringing together locals and visitors through expanded green spaces, new venues and community engagement programs. The vision for the Village includes a visitor center, classrooms, urban gardens, greenhouses and shade houses, green space and restoration of remaining original buildings for walking tours and additional operational space.

ABOUT VIZCAYA MUSEUM AND GARDENS

Vizcaya Museum and Gardens is a National Historic Landmark that preserves the Miami estate of agricultural industrialist James Deering to engage our community and its visitors in learning through the arts, history and the environment. Built between 1914 and 1922, Vizcaya is one of the most intact remaining examples from this era in United States history, when the nation’s most successful entrepreneurs built estates inspired by the stately homes of Europe. Vizcaya features a Main House filled with a decorative art collection, 10 acres of formal gardens, a rock land hammock (native forest), mangrove shore, and a historic village that is being restored to tell Vizcaya’s full story and provide additional spaces for programs and community outreach, including those on agriculture. Vizcaya has been a community hub since it opened to the public in 1953; it currently welcomes about 275,000 visitors annually.

I was able to interview Joel Hoffman, Executive Director at Vizcaya Museum and Gardens via email and he was able to give a history as well as the efficiency of the property and the programs being offered to the community. The vision for the Village is that of a cultural hub that encourages artists within the community to share, grow and explore this spectacular Miami icon. At the end of our interview Joel was able to share this with my readers,

“On July 6th, the plans to reunite the two sides of Vizcaya and restore the Vizcaya Village were unanimously approved by the Miami-Dade County Board of County Commissioners (BCC). Many Vizcaya employees, board members and county officials have been working toward this initiative for several years, and now Vizcaya will be able to move forward with these plans during its Centennial year.” – Joel Hoffman

JH: The entire Village was part of James Deering’s winter estate, built 100 years ago. . In the years that Deering occupied Vizcaya, and for some time thereafter, Vizcaya’s staff lived and worked in the Village. In planning the Village, Deering aimed to make Vizcaya self-sufficient—like the European country estates that inspired Vizcaya. On a practical level, the Village helped compensate for the limited goods and services available in early twentieth-century Miami. The Village included fields and greenhouses in which Deering’s staff grew flowers, fruit and vegetables. Its buildings housed staff quarters, workshops, an automobile garage and barns for domesticated animals. A herd of cows provided milk, and chickens furnished a ready supply of fresh eggs. A farm stand even sold surplus eggs and produce. By way of contrast, Deering made his wealth in the production of mechanized equipment used for farming on a much larger scale than what he created at his Miami winter home.

LS: How does the Village directly support the Museum and Gardens?

JH: The Vizcaya Village is and has always been part of Vizcaya. Some of the historic buildings have already been restored and provide meeting spaces and administrative offices. But since Vizcaya opened as a museum in the early 1950s, our activities have been centered on the east side of the property—the beautifully designed house and gardens that everyone knows best. This part of Vizcaya’s property is incomplete without the Village—it tells only part of the estate’s story, there are no spaces to meet community programming needs, and parking and ticketing facilities are completely inadequate for Vizcaya’s growing visitor ship. The Village enables us to tell Vizcaya’s full story of work and leisure. Once its buildings and landscapes have been restored, the Village will provide critically needed space to introduce more community programs and better welcome our visitors. During the centennial year, we have hosted several events to re-introduce the public to the wonders of Vizcaya Village and the incredible potential it has to propel Vizcaya forward as a cultural hub. These have included art making and farming activities authentically related to Vizcaya’s history

LS: What programs can people in the community sign up for?

JH: Vizcaya hosts a wide variety of programs and events for the community throughout the year. We recently hosted a free art-making workshops in the Village for families, and some 200 locals came together to work with the New York-based artists Processional Arts Workshop to create illuminated sculptures inspired by the history of the Village, including playful representations of animals and vegetables. The finale was a beautiful evening event where community members performed with these pieces throughout the Village to the delight of some 700 locals in attendance.

Vizcaya continues to offer a variety of programs including urban farming, edible gardening, yoga and meditation. The Vizcaya Village is also the setting for several forums throughout the year in subjects ranging from issues facing today’s museums, the use of technology to enhance learning, and art and artists who created works for Vizcaya. We also partner with other organization including Creative Mornings, Urban Paradise Guild, O’ Miami, and Florida International University to offer a wide variety of programs and events.

LS: Is the Village self-contained as well as self-sufficient?

JH: Historically, the Vizcaya Village allowed the entire estate to be self-sufficient. However, the various parts of Vizcaya—the architecture, art, history, and designed and natural environments—all work together to create a very special whole. Vizcaya’s proposed plan to reunite the two sides of the property is designed to tell the estate’s full story, giving visitors a more complete picture of life here 100 years ago. The proposed plans aim to make the Village a space where the community can gather, learn and enjoy a variety of programs and activities that the Main House and gardens cannot accommodate. We’ve joked, at times, that the Main House, which is filled with marble floors and silk wall coverings, is not the ideal venue for hands-on activities! So, the Village can definitely be enjoyed on its own in very different ways and we have already begun to introduce programs that take place only on the Village side of the property. But Vizcaya is an immersing environment in which the whole will always be stronger than its interconnected parts.

LS: How can the community support the Village best and what types of events are coming up for 2018 season?

JH: The community can also show their support by becoming members of Vizcaya. Members enjoy free admission to Vizcaya for an entire year and receive discounts on many programs and at the Café and Shop.

We look forward to a lot of activity as we begin Vizcaya’s second hundred years in the 2017-2018 season. Through the Contemporary Arts Program we invite artists to develop site-specific projects at Vizcaya and the next exhibition, Overload, opens in November 2017. Each December the community gathers to enjoy the holiday season at Vizcaya’s Holiday Evening event, and January 2018 launches our monthly Gardens by Moonlight program, where guests stroll the gardens by the light of the full moon. This is just a sampling of the many programs and events the community can enjoy. Visit www.vizcaya.org to learn more, and rediscover this spectacular Miami icon!